Feast for the Dead

"Even ants and other insects will run away from danger…they have intelligence and want to live, too. Why should we harm them?" - The Dalai Lama 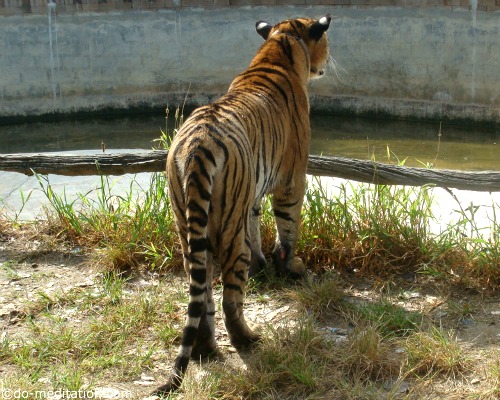 The story, 'Feast for the Dead,' is a jataka story, part of the Pali canon.

Once upon a time in Benares, a brahmin, who was well-versed in the four vedas, wanted to offer a feast for the dead.

He asked his pupils to fetch a goat and instructed them, "Take this goat down to the river, bathe it, hang a wreath round its neck, and bring it back."

"Very well," replied the pupils and took the goat down to the river, where they bathed and  garlanded it and set it on the bank.

The goat, by the power of remembering its past lives, became conscious of its deeds in those lives and was overjoyed at the thought of being liberated from all its misery on this day.

It laughed aloud like the smashing of a pot.

Then, at the thought of the brahmin, by slaying it, suffering the same misery that it itself had borne, the goat felt a great compassion for the brahmin, and wept with a loud voice.

"Dear goat," asked the astounded young pupils, "what makes you laugh and weep at the same time?"

"Ask me this question in front of your master."

So they brought the goat to the brahmin and told him of the matter. After hearing the story, the brahmin asked the goat of why it laughed and why it wept.

The goat spoke thus to the brahmin, "O brahmin, in times past, I, like you, was a brahmin, well versed in the ancient vedas, and to offer a feast for the dead, killed a goat for my offering.

And through killing that single goat, I have had my head cut off five hundred times, all but one. This is my five hundredth and last birth; and I laughed aloud when I realized that this very day I shall be freed from my misery."

The goat continued, "On the other hand, I wept, upon realizing that whilst I, who was doomed to lose my head five hundred times, was today being freed from my misery, you, as a penalty for killing me, would be doomed to a similar fate. Thus, it was out of compassion for you that I wept."

"What is this you say brahmin?" said the goat. "Whether you kill me or not, I cannot escape death today."

"Fear not, goat, I will go about with you to guard you."

"Weak is your protection, brahmin and strong is the force of my past evil-doing."

Setting the goat free, the brahmin said to his disciples, "Let us not allow anyone to kill this goat." He decided to closely follow the goat around accompanied by his pupils.

As soon as the goat was free, it reached out its neck to graze at the leaves of a bush growing at the top of a rock. And at that very instant, a bolt of lightening struck the rock, rending off a sharp piece that sliced through the goat's outstretched neck and beheaded the poor animal.

In those days, the boddhisattva was born a 'tree divinity' in the exact same spot. He now appeared seated cross-legged in mid-air to all those who had gathered there.

He thought to himself, "If these creatures only knew the fruit of evil doing, perhaps they would desist from killing."

He then taught the Truth to them,

"If folk but knew the truth that their existence is pain, then living things would cease from taking life. Stern is the slayer's doom."

Feast for the Dead is from the Pali Buddhist scriptures advocating compassion through non-violence toward all living beings.

A nice little meditation story for children, it makes clear how the cycle of karma and the law of cause and effect manifest in our lives.

Return from Feast for the Dead to Meditation Stories