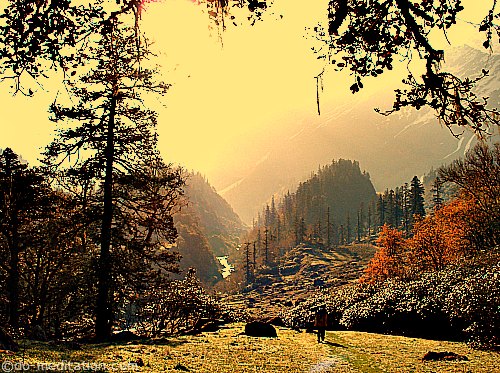 There are many meditation health benefits to be had if you meditate regularly.

Consistency and perseverance are the two essential ingredients for deriving maximum health benefits from any meditation practice.

Below is a list of some very specific scientific studies done to ascertain how meditation benefits our health.

Dr. Herbert Benson, President of the Mind Body Medical Institute at Harvard Medical School, has shown that meditation leads to raised levels of nitric oxide that has the effect of dilating the arteries and allowing increased blood flow through the body, thereby reducing blood pressure.

During meditation the brain produces higher levels of endorphins or 'feel-good' hormones. More importantly, they play a part in our immune systems, stimulating the production of White Blood Cells (killer cells), which detect and destroy harmful bacteria and viruses.

But endorphins are not the only hormones produced. Center for Mindfulness in Medicine at the University of Massachusetts has shown that output of melatonin also increases, which acts as a powerful anti-oxidant destroying harmful free-readicals that cause cancer.

DHEA, another powerful hormone, has been shown to increase with regular meditation. It is the most abundant steroid in the body and the only known hormone that decreases directly with age.

Leading stem cell researcher, Doris Taylor, PhD, director of the Center for Cardiovascular Repair at the University of Minnesota, measured the blood of Matthieu Ricard, a French Buddhist monk and the author of Happiness, before and after meditation.

The results astounded her.

After only 15 minutes of meditation, Matthieu had a "huge increase in the number of positive stem cells in his blood."

The American Journal of Medicine (Volume 100, 1996) reported that one-hundred percent of insomnia patients reported improved sleep and 91% either eliminated or reduced sleeping medication use after practising meditation.

Practising mindfulness meditation over an 8-week period reduces the severity of irritable bowel syndrome (IBS) symptoms in women, according to a study published in The American Journal of Gastroenterology in 2011.


Practicing mindfulness meditation appears to be associated with measurable changes in the brain regions involved in memory, learning, and emotion.

In this study, researchers from Massachusetts General Hospital, Bender Institute of Neuroimaging in Germany, and the University of Massachusetts Medical School, took magnetic resonance images of the brains of 16 participants, 2 weeks before and after they joined an 8-week mindfulness-based stress reduction program.

Brain images in the meditation group revealed increases in gray matter concentration in the left hippo-campus. The hippo-campus is an area of the brain involved in learning, memory and emotional control, and is suspected of playing a role in producing some of the positive effects of meditation.


It is great to see meditation health benefits positively linked to even structural changes in the brain - motivation enough to take the plunge and try one of these meditation types or techniques today.