"Bijakshara (seed-letter) is the supreme Bindu (point/center). Nada (spiritual sound) is above it. When that Nada ceases along with the letter, the Nada-less is the supreme state"
- Dhyana Bindu Upanishad 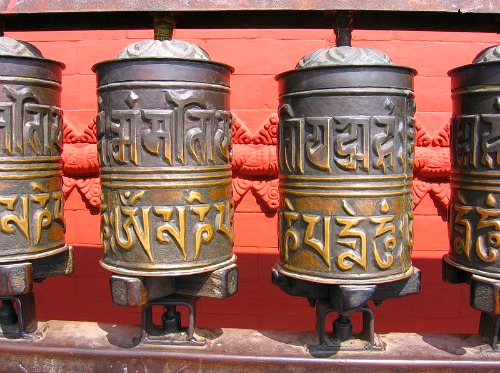 Mantra meditation is the basis of arguably the most well-known form of meditation in the West, Transcendental Meditation (TM).

Mantra comes from ancient Sanskrit and can be literally translated as 'instrument of thought.'

The most basic mantra is Om (Aum), which in Hinduism is known to be the source of all mantras.

Om is believed to be the primordial or the 'first' sound of the universe generated by the cosmic vibration that resulted in all creation (think Big Bang). The Bible also says...the beginning came from the word.

Just like our thoughts, words are a form of energy, which is quite evident in their palpable frequency and vibrations. Words carry within them the seeds of creation and are a powerful force for bringing into existence that which only exists in the ethereal plane.

What is a mantra?

A mantra is a word or phrase whose recital raises the level of consciousness by bringing about greater awareness. It opens the doorway to a deeper understanding of the self and of the laws of nature.

Buddhists use the recitation of verses as a way of cultivating an awareness of the qualities of the Buddha. Followers of the 13th century Japanese Buddhist monk, Nichiren Daishonin, chant Nam Myōhō Renge Kyō (Lotus Sutra) as the exclusive means to attain enlightenment.

What mantra to use?

Any verse from the holy texts like the Bible, Quran, Adi Granth, Vedas, Upanishads, Yoga Sutra and others is considered powerful enough to be repeated to great effect, and can be used for mantra meditation.

A few examples are listed below:

The word or phrase used for doing mantra meditation need not have a deeper meaning or be significant in any way.

Practitioners of transcendental meditation use monosyllables like ing, im, aing, aim, shring, shrim, shiam and shiama to do meditation.

Every person born in this world has a unique sound associated with them. This beej (seed) mantra is derived from the sound of each individual's nakshatra-pada.

Knowledge of the nakshatra-pada allows one to create a mantra unique to the individual and one that is in harmony with the universal forces.

Your can find your own personal beej mantra on the primordial sound meditation page.

How to do mantra meditation?

Once you have decided upon the mantra to use for your meditation, begin your session with:

It is recommended to do mantra meditation for 15-20 minutes twice a day.