How to do Visualization Meditation for Maximum Impact 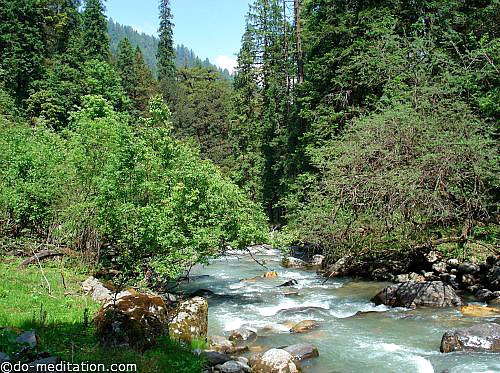 As it involves a high degree of 'active' involvement from the practitioner, it is often stated to be one of the most powerful tools available to effect personal change.


Many years ago, when first introduced to the concept of visualization, I was a skeptic and thought of it as a euphemism for day-dreaming.

And indeed that is the common experience of most people, who have never seen any tangible benefits from their visualization exercises.

Then, why write about it?

The answer is a bit wordy, but please bear with me.

At a fundamental level, change through visualization does make intuitive sense.

You would agree that whatever is around us was first a thought in somebody's mind - a house, an electric appliance, a piece of intricate art, or a simple cotton garment. In the very beginning, all of them existed as an idea, as a notion, with no material reality.

It took physical effort to transform the energy of the mental plane into an object in the real world.

This is the first stumbling block for most people.

We visualize, but we don't put in the work. We want to realize and achieve by visualization alone.

Unfortunately, that's not how things work in nature.

Translating an idea into reality, more often than not, requires hard work. It also requires self-belief.

Without the confidence in your ability to achieve the desired reality, you simply will not succeed.

And this is where we make our second mistake.

We think of outcomes that we don't intrinsically believe are achievable.

We can continue visualizing for days, weeks or months and nothing will come of it. For us to have any hope of realizing them, they need to be credible in our eyes.

I am not saying one should dream small, but to visualize financial independence when you are flat out broke and sinking in debt probably wouldn't get you far.

In such a scenario, when faced with zero progress, one would quickly despair and quit rather than stay patient and diligent.

Instead it would be far better to first visualize and take concrete steps toward reducing debt. Once that is achieved, the next stage toward financial independence can then be worked upon.

For visualization to have maximum impact, we need to:

How to do visualization meditation?

It brings you closer to your desired positive end-state. At the same time, it also helps you rid yourself of the negativity and problems that hold you back.

If practiced regularly, visualization meditation will indeed manifest the reality you seek.

(Why visualization meditation is endorsed by celebrities like Oprah, Tiger Woods, Tony Robbins, Will Smith and others)

Do remember to back up your meditation efforts with efforts in the real world. Support your meditation practice with actions on the ground and you are bound to see amazing results.