"Above all others is the brilliant, thousand petalled lotus. It is outside this microcosm of the body and is the giver of salvation" - Shiv Samhita 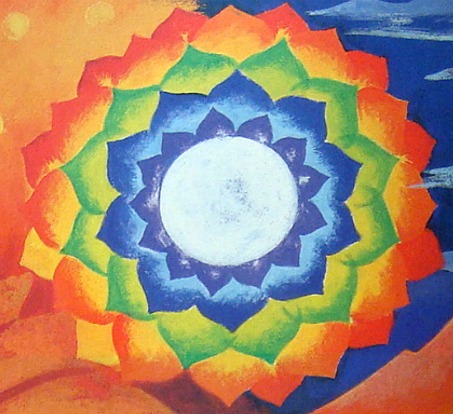 Seventh chakra meditation focuses on the Sahasrara or crown chakra, the gateway to divine consciousness.

An awakened crown chakra is like a thousand suns blazing in the sky.

Sahasrara in Sanskrit means "thousand," so sahasrara chakra translates into a thousand-petalled lotus.

Traditionally, this lotus is pictured upside down with the stem and roots rising to the sky and the petals pointing downward. A rooting in heaven bringing down divine grace to the crown of our heads!

At the level of the seventh chakra, you have transcended the physical reality of your being and there is no traditional element associated with the chakra. Although some scholars still like to refer to 'thought' or 'mind' as the chakra's element.

The color of the chakra is violet or purple, but some texts also describe it as pure white.

The halo, often shown in images of deities and saints, comes from the glow of an active crown chakra encompassing the head.

Sahasrara chakra controls the cerebral cortex. An unbalanced chakra could lead to physical manifestations like headaches, learning disabilities, autism and senility. At a psychological level, you may find it hard to connect to people, and with your energy circulating only in the lower chakras, obsessing over materialistic pursuits.

The following seventh chakra meditations will help you activate and balance your sahasrara chakra.

This meditation takes us back to the Origin, where we all come from. By dissolving our separate identity, expressed through the above physical and mental elements, we become one with the Absolute Reality.

Seventh chakra meditation brings visions of realized beings and connects us to the wisdom of all those who have gone before us.

Following guided instructions, as provided in crown chakra guided meditation, can be an easier way of doing seventh chakra meditation.